Mamasapano Revisited: The Press Got Played 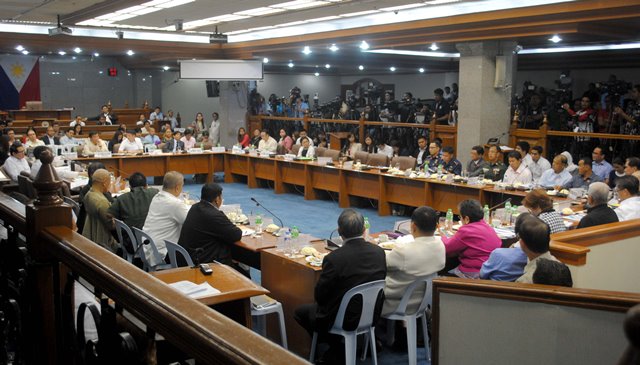 Senators and key officials discuss the Mamasapano incident at the Senate in a hearing held February 2015. PHOTO BY LITO OCAMPO

SENATE HEARINGS in aid of legislation are an important part of democracy. The very nature of these hearings – senators have subpoena and contempt powers and are immune from legal action – make them a potentially great venue for ferreting out the truth on issues of national import.

But a lot of what happens in these hearings depends on who call them and how much political power they have to convene one. And often, it’s not about aiding legislation but advancing a political agenda. The Senate’s recent hearing on the Mamasapano incident, timed during the anniversary of that bloodbath, is a case in point.

All well and good. But Enrile did not deliver on his promise, thus raising the issue of what exactly was the hearing all about. If one considered that much of what happened that day centered on Enrile’s attempt to pin everything on Aquino, he or she would conclude that it was all politics.

Aquino’s accountability for the debacle is important and must be pursued. But the hearing also failed on this count because no new evidence and no new information was presented, except the exchange of text messages among President Aquino, suspended PNP chief Alan Purisima, and then SAF director Getulio Napenas which was in the Senate’s possession, and the Armed Forces of the Philippines’ (AFP) timeline of events related to the operation.

The media reported the critical points the hearing yielded but most refrained from stressing a most important point: Enrile himself did not provide anything new, thus his threat to reveal new information was misleading, as was his claim that he had damning evidence that would show the complicity of Aquino in the planning of Oplan Exodus, and his failure to support the beleaguered SAF units.  Much of what Enrile described as new information had already been established by other fact finding bodies in 2015, including the Senate.

Enrile’s line of questioning, particularly in the operation’s timeline of events, merely rehashed most of what has already been confirmed in the first hearing. In fact, the Armed Forces of the Philippines – not Enrile – provided the significant information during the seven-hour hearing.

The first hearings did not allow the resource persons from the military as much time as they were given this time around. So the public heard the blow-by-blow account of when and how the AFP received information from the SAF commander, establishing that the delayed information relayed to the military did not allow them to respond immediately. This further incriminated Napeñas for the blunder in Mamasapano, which was not made as evident in the first hearings.

Worse, speculative reporting involving an audio recording produced by retired Police Chief Supt. Diosdado Valeroso – which allegedly established an attempt to cover up the deaths in Mamasapano – hyped up the hearing. But because the recording was unverified, the press dropped further reference to it.

At the close of the hearing, initial television reports used quotes from the beginning of the session, when Enrile made his assurance of new information, but without reference to Senator Grace Poe’s remarks at the end of the session, in which she concluded that nothing new and substantial that would warrant a change in the Senate committee’s findings had emerged from the hearing. This point, however, was buried or mentioned only at the end of the reports, so that those who did not listen to the entire hearing might have concluded that Enrile had actually presented new evidence.

The evening reports from news programs 24 Oras (GMA-7), Aksyon (TV5), Network News (CNN Philippines) and TV Patrol (ABS-CBN 2) on January 27 focused more on Enrile’s attempt to make President Aquino liable for much of what happened on the ground. However, the reports did not point out what became apparent after the hearing: that the senator had failed to prove the validity of the eight points he stressed during his opening remarks in which he said Aquino:

Of the four news programs monitored, 24 Oras gave the most focus on the AFP’s side throughout its report of the hearing.

Reports about the hearing in the following days were more or less similar to what had initially been reported by the news programs. For instance, the outcome of the hearing made it to the headlines of newspapers on January 28. The Philippine Daily Inquirer alone had three separate reports on the front page and two other articles inside. Each one covered what Enrile, Napeñas, Poe and administration allies had said. Similar reports ran in the Manila Bulletin and The Philippine Star.

Other topics covered include the critical points that came up, particularly the involvement of American intelligence personnel in what was supposed to be a police operation; the reward money on Marwan; and most importantly, the AFP’s own timeline.

Other dailies such as The Daily Tribune, The Manila Times and The Standard also ran similar articles but their reports focused more on Enrile’s attempt to put the blame for the Mamasapano debacle on Aquino. Two days after the conclusion of the second hearing, meanwhile, the Tribune reported the conflicting opinions of senators Franklin Drilon and Juan Edgardo Angara about the legality of playing the Valeroso audio recording during the hearing.

It is worth noting, however, that the Inquirer and Rappler pursued different points of discussion. The Inquirer’s January 29 editorial “Enrile’s dud” pointed out that not only did the senator present “old information;” he also failed to point out or comment on the established fact that Oplan Exodus was a botched operation.

Rappler’s January 31 article, “Enrile: Too sick for detention, but fit to work?” wondered why the senator participated in two hearings – the Mamasapano probe and the hearing on corruption allegations against Vice President Jejomar Binay – when he was supposedly in poor health, which was the basis for the Supreme Court’s order granting him bail. Rappler also asked whether Enrile’s “performance of his duties” is a valid ground to revoke his bail order.

The press did point out the critical points that emerged from the reopened Mamasapano case. But the fragmented reports on whatever important developments in the hearing did not help advance the public’s understanding of the significance or implications of revisiting the findings already established last year.

The hearing’s conclusion was clear: Enrile had failed to live up to his promise of presenting new information. Even Poe, who chaired the hearing in 2015, and who as a candidate for president would have benefitted from Aquino’s implication in everything that went wrong with Oplan Exodus, said as much. This should have been given enough prominence in the media’s coverage and woven into the reports. By failing to do this, the press was played by a shrewd politician seemingly out to exploit the Mamasapano debacle for political reasons.