JEERS TO TV Patrol for unnecessarily emphasizing the alleged sexual orientation of a kidnapping suspect in a Nov. 28 report.

TV Patrol reported that the suspect is homosexual. However, it did not indicate its source for the suspect’s sexuality.

“Nailigtas ang isang kinse-anyos na binatilyo na kinidnap umano ng isang bading (A 15-year old boy was rescued after being allegedly kidnapped by a gay man),” the anchor read, adding that the suspect had already kidnapped other boys before, according to the police.

The report showed the victim’s mother, with her face blurred, and then the picture of the alleged kidnapper who is at-large. “The gay man, Rosendo Alano Mengullo, also known as Cyrill, allegedly brought her son with him without permission,” the reporter said in Filipino.

Mengullo took the boy from Tondo, Manila to San Policarpo, Eastern Samar, according to the victim’s mother.

“Hindi naman daw siya ginalaw ng suspek pero binabantayan para hindi makalabas ng bahay [The victim says he was not molested  by the suspect but was prevented from going out of the house],” the reporter continued, adding that the victim had known the suspect for only two weeks when the suspect started offering the victim gifts such as a motorcycle. 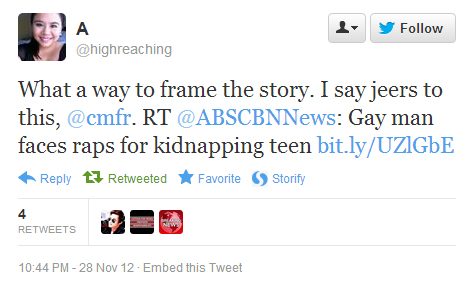