Examining the Mamasapano Impact on Peace 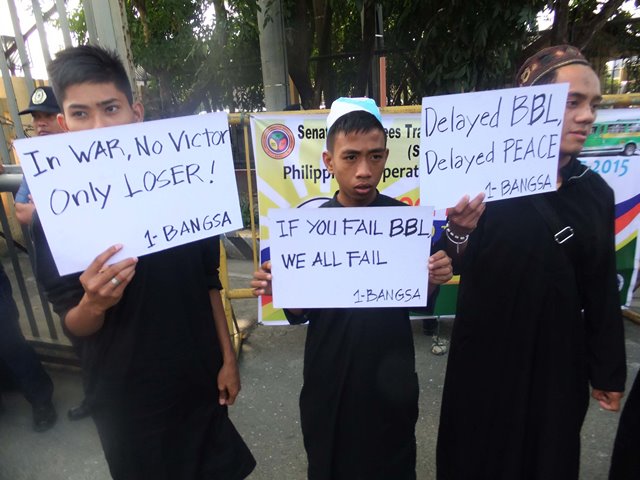 ​​Supporters of the Bangsamoro Basic Law (BBL) rally outside the Senate in Pasay City in February 2015. PHOTO BY LITO OCAMPO​

Rosauro looked at the setback in peace negotiations, noting the delay in the enactment of the Bangsamoro Basic Law (BBL), the “adversarial position” of some politicians towards it and the “Morophobia” that ensued among the public.

Rosauro also referred to the Institute for Policy Analysis and Conflict’s report “Killing Marwan in Mindanao” which stated that Marwan was not exactly the high-profile terrorist he was made out to be, but that the bounty on his head and his eluding capture many times may have contributed to the mistaken characterization.

The series underscored that the botched operation was implemented outside the workings of an existing peace process mechanism, one that has worked for both parties in the past. The blunders of the operation, in Rosauro’s words, “dealt a heavy blow to the peace process in Mindanao, creating sociopolitical crevices that can be filled by the dangerous seeds of extremism which can threaten the country and its Southeast Asian neighbors.”

CMFR noted the unethical, inflammatory and sensationalized reporting of the media on the incident a year ago, calling out media organizations for trivializing grief, failing to immediately give time and space for other voices, and lack of contextual information on the Muslim insurgency and peace negotiations. But CMFR cheered ABS-CBN’s TV Patrol and CNN Philippines’ Network News for exploring developments and other issues in Mamasapano, Maguindanao, a year after the incident.