Duterte Mania and Human Rights: A Disturbing Lapse in Coverage 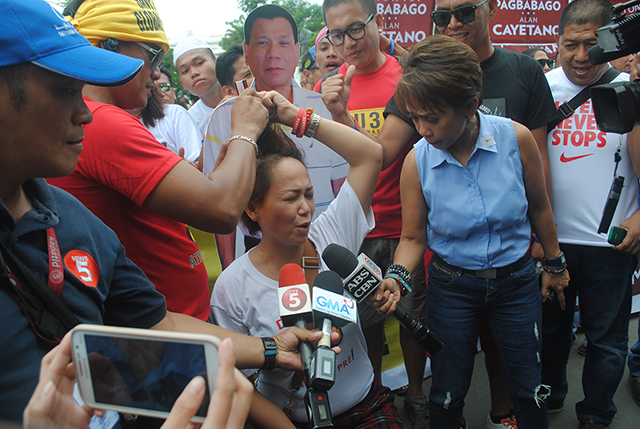 “The media kept up the Duterte watch to the very last minute of the period for the filing of certificates of candidacy from October 12 to 16.” PHOTO BY LITO OCAMPO.

OF ALL the highly urbanized cities in the Philippines, Davao City has garnered probably every accolade out there: the most livable city, the most environment-friendly city, the city with the cleanest and best-tasting potable water, the safest city, among others. Davaoeños and visitors agree that everything is in order in Davao City, where it is illegal to smoke in public, where trash is collected efficiently, where you can walk in its streets at three in the morning and not have to worry about being mugged.

These honors are all credited to Rodrigo Duterte, its tough-talking mayor who inspires awe and fear at the same time. He ensures that his city runs smoothly by using a combination of good local governance and, by his own admission, a tough stance against crime. He stands tall among other mayors and is revered for having the political will to tackle problems that his peers haven’t.

This is why when some people floated the idea of Duterte running for president, it spread like wildfire, gripping the imagination of Filipinos who have grown tired of the crime, the disorder and the seeming inability of government to make even the simplest of things work. The media itself got caught up in the hoopla, doggedly – and often unthinkingly – covering Duterte’s actions and pronouncements and, perhaps as a result, neglected to tackle one of the basic issues against the mayor: his human rights record.

In January, Duterte toured the country to speak on the issue of federalism. While he did push for federalism during his tour – it’s the only system, in his view, that would work, given the Philippines’s fragmented political culture – it looked and sounded like a campaign tour in preparation for higher office.

Technically, Duterte had not declared himself a presidential candidate. He maintained an air of disinterest in a possible presidential run but nevertheless fed the press with mixed messages that kept journalists hooked like no candidate ever did. News stories in print and broadcast carried every single turn in Duterte’s conflicting statements about a presidential run.

“This is the first time that I am mentioning the possibility of being the president. This time, well, I am thinking about it, really.” (“Duterte slams critics: I might run for president because of people like you,” Philippine Daily Inquirer, May 30, 2015)

Politicians actively fueled the hype, thanks to journalists who echoed everything they said in support of the mayor. Vice presidential aspirants such as Senator Ferdinand “Bongbong” Marcos Jr. and Senator Alan Peter Cayetano declared themselves candidates for vice-president and expressing their willingness to run as Duterte’s running mate. Both senators supported Duterte in his call for federalism. Cayetano launched his bid for the vice presidency in Davao City and called the mayor his “dream running mate.”  Marcos sought Duterte’s advice regarding his political plans, fanning further speculation about Duterte’s political intent.

Senator Cynthia Villar said Duterte is a “good presidential bet” given his long administrative experience in the local government. Senator Miriam Defensor-Santiago, a presidential candidate, included Duterte in her list of potential running mates, saying that the mayor would make “an excellent VP for enforcement.”

The media kept up the Duterte watch to the very last minute of the period for the filing of certificates of candidacy from October 12 to 16.  The whole thing took an interesting turn when some journalists posted in their social media accounts that a private plane had flown Duterte to Manila, where he would hold a press conference upon landing. As it turned out, Duterte did not even leave Davao City. But the intense interest among the press and the public in his whereabouts cemented the view that he might have a real shot at the presidency.

In the end, however, Duterte did not file his candidacy. But that did not stop his supporters. On October 27, the Partido Demokratiko Pilipino-Lakas ng Bayan (PDP-Laban) held a press conference to announce that the party had adopted a resolution that said the party’s presidential bet, PDP-Laban deputy secretary general Martin Diño, would be replaced by Duterte if Diño decided to withdraw from the race or is disqualified by the Commission on Elections. Two days later, Diño withdrew. While Duterte maintained his decision not to run for president, he did point out that he had not yet receive a formal communication from the PDP-Laban asking him to take Diño’s place. There is still hope, Duterte’s supporters must have thought.

If this has all been a strategy to hype up Duterte’s candidacy, the press certainly bought into the plan. It covered Duterte every step of the way, reported his every statement, leaving off any kind of skepticism about his plans.

Perhaps as a result of what can only be described as Duterte mania, hardly any discussion took place about a more significant aspect of Duterte’s possible run for the presidency: the allegation that he, through the Davao Death Squad, was responsible for the killing of hundreds of residents, among them children, in his campaign to rid Davao City of crime.

The mayor’s reputation as a crime-fighter had taken off on the wings of his constituents’ supposed approval of his actions and statements that tend to support the killing – without due process – of people suspected of committing crimes. This image took years to develop. In 2002, at the height of allegations that the city – if not Duterte himself – created the Davao Death Squad to hunt down suspected criminals, Time magazine ran a profile of the mayor they called “the Punisher.” The publicity for Duterte’s supposed tough stance against crime flowed freely from that point on.

A former prosecutor who had said he he was familiar with the failures of the criminal justice system, Duterte was known to take matters into his hands, targeting anyone perceived to disturb the peace in Davao City but particularly those involved in the drug trade.  “I tell the people during elections: If you want a mayor that doesn’t kill criminals, look for another mayor,” he said in 2002. “I was elected in 1988, reelected in 1992, reelected in 1995, reelected in 2001. That’s my gauge of people’s acceptance.”

His strongman approach was criticized by no less than the Commission on Human Rights (CHR) and other human rights advocates as a form of vigilante justice. But he was cheered in many quarters, including his colleagues in the League of Mayors, some of whom announced they were ready to follow Duterte’s example. (Indeed, similar death squads are now common in other cities, particularly in nearby Tagum City, where the mayor and the police were implicated in such killings.)

Duterte himself admitted in a May 24 interview in his Davao television program Gikan sa Masa, Para sa Masa (From the Masses, For the Masses) that he is indeed connected with the Davao Death Squad. “Am I the death squad? True. That is true.” This admission echoed what Duterte had said in the May 15 national convention of the Workplace Advocates on Safety in the Philippines, during which he took pride in saying that Davao’s being the ninth safest city in the world, according to popularity website Numbeo, should be attributed to his city administration’s unwavering stand against criminality.

Duterte, however, retracted these statements and said instead that when he mentioned DDS, he was referring to the Davao Development System and not the Davao Death Squad. He also denied killing or ordering the killing of anyone.

The press, unfortunately, gave scant attention to this matter, let alone elevate the discussion to its logical next level, which is possible accountability for Duterte’s role in the DDS. The CHR and non-government groups such as Human Rights Watch had reported about the Davao Death Squad. In 2009, HRW published a report called “You Can Die Anytime” that documented extrajudicial killings in Mindanao and the number of executions during Duterte’s watch. In 2007, the UN special rapporteur on extrajudicial killings, Philip Alston, investigated the DDS killings and concluded that Duterte should be held accountable.

This is a disturbing lapse in coverage by the press, given that the main basis for Duterte’s popularity and possible candidacy is his role in the DDS. Moreover, there is ample material in the public domain that journalists could have used to provide a contextualized and fuller picture of the mayor.

A strong stand on crime and the promotion of law and order are desirable commitments, especially in a country plagued with crime. But all exercise of power must observe limits. In covering a candidate like Duterte, journalists missed the opportunity to promote public discussion about the danger of trading off human rights for public order.