Dengue After Dengvaxia: Media Focused on the Politics of it 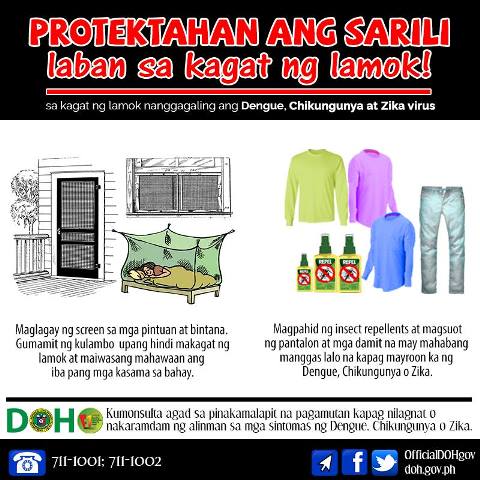 THE RAINY season is also dengue season in the Philippines. In 2017 alone, the Department of Health (DOH) recorded 131,827 dengue cases nationwide, of which 732 were fatal.

Life-threatening dengue is a serious concern for everyone. A person can be infected several times, as four strains of the disease are borne by the female Aedes aegypti mosquitoes endemic in the country. The Department of Health (DOH) should be leading efforts to control it and minimize its impact on the population through, among other means, information campaigns and immunization programs.

Government efforts at controlling the disease suffered a setback when the France-based pharmaceutical company Sanofi Pasteur issued a warning that its anti-dengue vaccine Dengvaxia could have adverse effects on the recipients who had not previously had the infection. This discovery caused the DOH to suspend the dengue immunization program in December 2017.

The controversy sparked fears and concerns from the public, prompting the holding of hearings in both the House of Representatives and the Senate (See: The Dengvaxia Debacle: The Volatile Mix of Politics, Health and a Failure of Science). The hearings, however, reduced the issue to a political spectacle that failed to provide credible and useful information.

With the rainy season and the flooding of extensive areas, the media should check how the DOH is addressing the dengue problem without the dengue immunization program. But print media coverage was surprisingly limited and mostly focused on the politics of the issue. The reports on dengue that did see print provided the number of cases, with little interpretation of what these cases meant in terms of the seriousness of the health threat.

CMFR reviewed the reports on dengue of the three leading Manila broadsheets Manila Bulletin, the Philippine Daily Inquirer and The Philippine Star from June 1 to August 15, 2018.

Politics in the lead

The Bulletin and the Star published the most number of dengue-related reports with 22 and 21, respectively, while the Inquirer only had five in the last two and a half months, for a total of 48 reports (See Table 1.1 Total Number of Dengue-Related Reports). 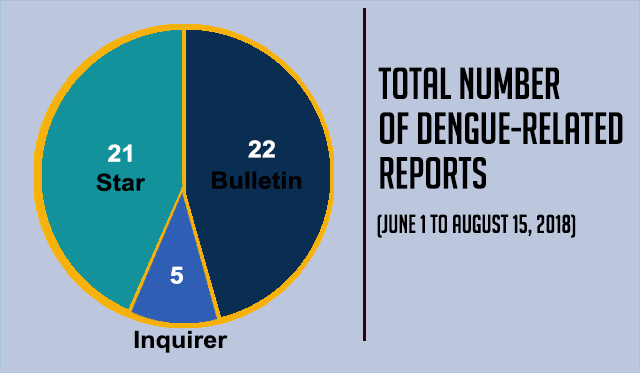 A majority of the reports (31) in the three broadsheets monitored during the period were primarily on the lawsuits against past government officials. These accounts reported case updates as well as the statements of former President Benigno Aquino III, former budget secretary Florencio Abad Jr. and former health secretary Janette Garin who were implicated in the fiasco.

Only 15 reports provided information more relevant to the question of how serious the dengue problem has become, such as the dengue cases in different parts of the country. These noted either an increase or decrease in dengue cases compared to previous government data (See Table 1.2 Dengue-Related Reports per Theme). 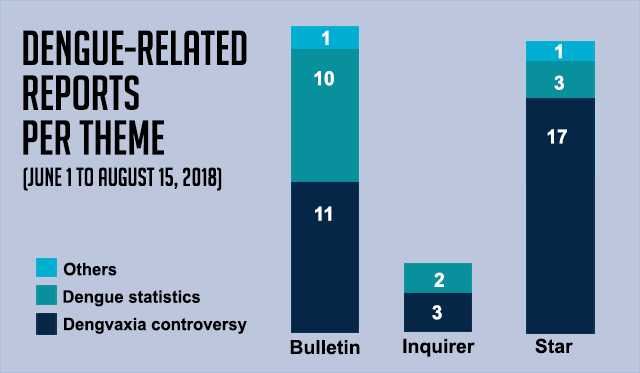 The DOH itself has been curiously quiet in the past two months, and seems to have launched no significant dengue information campaign despite the month of June’s being Dengue Awareness Month. Neither has the DOH website provided any updates on the health department’s anti-dengue drive. The DOH official Facebook page, meanwhile, only had two posts on July 16 and July 31, respectively, which were infographics on dengue prevention.

Except for some mention of dengue prevention tips by DOH officials and the initiatives of local health offices, the broadsheet reports provided no information on what the health department is doing to keep the dengue problem in check, and what’s more, did not call attention to the possibility that the DOH might be remiss in fulfilling that duty.

The media also neglected to explore the post-Dengvaxia dengue situation. It has been a little over two years since the dengue immunization program was implemented in April 2016, and eight months since its cancellation in December 2017. By this time, there should have been reports into whether the vaccine had made a difference in the dengue situation in the country.

Dengue statistics from 2013 up to the first three months of 2018 are available in the DOH website. Information about public health issues paired with insights of competent health experts can help the public to demand from government a more effective response to health threats, protecting them from the disease and helping them to cope with the problem this rainy season and beyond.