Coverage of the BBL (7-14 April 2015): Bias and Prejudice against Bangsamoro

The scope of news is often narrower than the events that drive the editorial agenda. On a daily basis, journalists report the news from the limited lens of what has occurred in the 24-hour cycle, its telling enclosed within the funnel of circumstances of the day. This narrow scope excludes any information about the longer process that has brought matters to the present point. CMFR has noted the limitation of this news convention, calling for its review and revision, especially when it involves news which deals with policy and legislation, and other efforts to change historical conditions.

The proposed BBL is one such development. To reduce its coverage only to the current voices raised for or against it is to limit public understanding of the law as a groundbreaking policy to create an autonomous region and the profound significance of such a development in our history as a nation. Without this context the coverage is disconnected from its background and its history. The resulting loss of perspective renders public utterances and official statements, the grist of the news mill, as mostly static, hardly helpful to a public trying to figure out where they stand on the Bangsamoro issue.

Mamasapano triggered the open expression of long-standing prejudices against Islamized Filipinos. Perhaps, there was little understanding of the terms of the CAB, since it was cheered by the news media as an event in 2014. The BBL after all would be one of the results of the CAB.

The dominant ethnic and linguistic groups in the capital region hold the overwhelming advantage over government and media. Coming from the middle class and the well-to-do, a national elite seems to have held on to a colonial mindset about Moros as pirates and plunderers. There was scant reference in the news to the serial measures of injustice suffered by these communities as the national government declared much of their land as frontier country open to homesteaders and plantation owners moved in from outside Mindanao.

Few are aware that the deprivation of Muslim communities has continued through the failure of several administrations to address their needs, not to mention the periodic conduct by some administrations of “all-out-war” campaigns. Mayor Joseph Estrada, a proponent of the latter when he was president, revived this call with unabashed zeal and received disproportionate media coverage for it.

There are junctures in history when political leaders need to decide what may not be popular with the public. They need to reach out and persuade and create a critical mass for what they believe is right, gaining the consent of the governed for a policy course. The discussion of critical and controversial policy is legitimate news, to help citizens understand the terms of the debate. The press and news media are crucial instruments for this purpose, and CMFR’s media monitor provides findings that can be helpful for policy makers as well as the public as consumers of news.

The question for the Philippine press at this time challenges the conventional notion that the so-called objectivity required by journalism makes the news media merely “neutral transmitters” of news. This has enforced journalistic resistance to the idea of playing a role in the development of sound laws and progressive policy. But the kind of news citizens gets do determine their outlook on various things, such as the adulation of celebrities and entertainment figures. Public opinion matters; it is a force that exerts influence on political decisions. Because of this influence, those in the news need to be aware that the sensational treatment of news can create impressions that cannot be erased easily with corrections; and that partisan forces can influence and drive the news agenda. Social media, which issues from the faceless, nameless public, now serves as an indicator of public opinion. But social media can be manipulated, driven by paid users, providing pre-packaged opinion.

Congress went on scheduled recess from March 21 to May 3. But the House held special sessions to resume hearings on the Mamasapano incident on April 7 and 8. The Senate held hearings on the BBL on April 13.

The issues and concerns presented by the members of the Senate Committee included in the order of their questioning, as follows:

The television news channels covered the proceedings of the Congressional hearings live. The news reports, both in broadcast and print, provided a narration of the proceedings in the Senate and in the House.

The sources of information were limited to the officials who presided during these hearings, the committee members who spoke or raised questions, and the resource persons who were invited to testify before these bodies. (See Table 1.)

Other public figures speaking on the issue were also given space and time. But because of the typical frame of “he-said-she-said” which lines up quotes from sources, the coverage lacked the more factual analysis of what caused the Mamasapano incident and the necessary reference to the history of the Bangsamoro and the Constitutional provision on autonomy which addresses historic injustice. Other voices — the framers of the Constitution, civil society groups who have worked on these issues and other independent sources — were barely in the news.

At this time, four groups investigating Mamasapano had already released their findings. These had been reported by the press weeks before the hearings resumed. The reports were in agreement in finding infirmities in the conduct of the SAF and in the accountability of Police Director General Alan Purisima, who had already resigned from the post.

And the news reports carried the same. 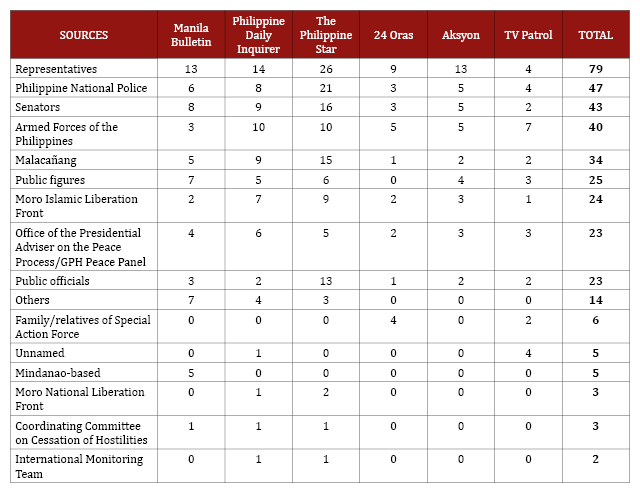 Because of Mamasapano, the hearings were conducted in an adversarial mode. Manifestations and questions by certain senators and congressmen were spoken with open and undisguised hostility. (See Tables 2 and 3.)

“Beyond the legal implications, it calls into question the MILF’s good faith in entering into the peace agreement. Why deceive the Philippine government in this way?” (Marcos)

“The BBL is a very important piece of legislation. I prefer discussing it with persons that I know.” (Sotto)

Those who spoke to clarify and provide a different perspective were in the minority. Senator Teofisto “TG” Guingona III provided an explanation to help understand the concern, but his colleagues largely ignored it and the news media hardly referred to Guingona’s intervention.

The Inquirer gave the most space to Guingona’s manifestation explaining the use of alias and how the Senate should view it in relation to the BBL discussion:

“Guingona reminded everyone at the hearing that it is ‘faulty to use any (law) or (legal concept) on somebody who is actually rebelling.’

“He stressed that his fellow senators should understand the culture in Mindanao, that while there is a peace agreement in place, ‘the security issues are very, very complex.’ 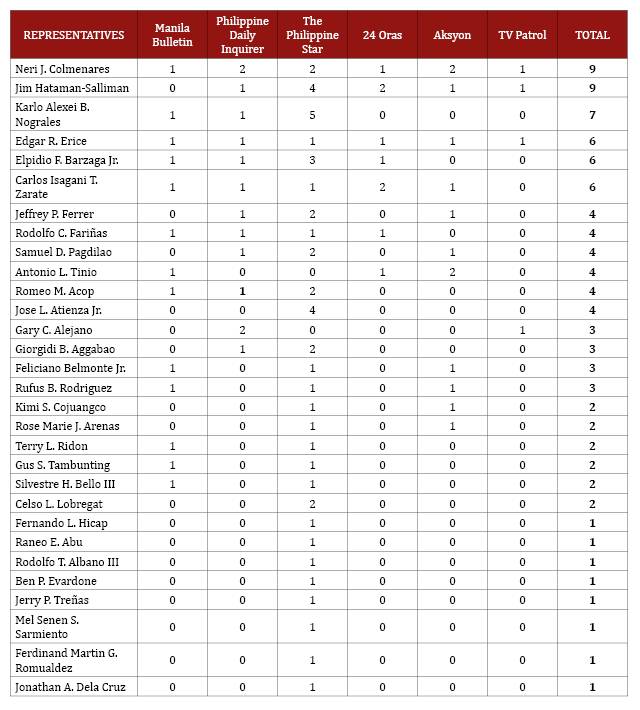 The press rarely presented the viewpoints of those directly affected by the issue: people in the ARMM and in Mindanao for example. There were stories that reported sources welcoming the peace process and the passage of the law, but these were relegated to the inside pages, indicating the importance given to these views. (“Mamasapano students appeal for peace,” “All-woman peace mission to dialogue with legislators,” “Sulu, North Borneo Sultanate wants say in BBL consultations,” “Peace generates jobs, Duterte tells graduates,” “Maguindanao royal houses back BBL;” Bulletin) In contrast, there were more views opposing the BBL and the Bangsamoro peace process on the front pages. (See Table 5.)

This imbalance gave the overwhelming impression that the draft of the BBL was in its key provisions lacking in legality or were outrightly unconstitutional. But the press hardly explained the basis of the criticism. Particularly “problematic” BBL provisions were mentioned in passing, but the news reports neither cited or explained the proposed law. It seemed enough simply to raise questions on the BBL’s validity and its worthiness of public support. (“Senate panel keen on removing 3 BBL provisions,” Star) And yet providing context on the opposing views, the consensus of opinions and identification of solutions would have helped lawmakers and the public understand the available options and address complex policy needs.

CMFR categorized news reports that tackled the events related to the Mamasapano investigation and the military offensive against the BIFF as neutral. The news reports provided facts and updates, and did not reflect a particular interpretation of the events.

The review of coverage included developments related to President Benigno S. Aquino III’s invitation to five public figures who would later call themselves the Peace Council. The articles were straightforward reports of names and the wording of the President’s invitation, with some positive remarks quoted:

“’There is an attempt, there are requests for collaboration and cooperation between the Council of Peace and the Friends for Peace. And I do not see any problem with that as long as the parallel tracks we are doing is on the BBL and the mandate. And the mandate is to make sure that the BBL is within the constitution,’ said Quevedo.

“(Cotabato Archbishop Orlando) Cardinal Quevedo, expressed hopes that the BBL will not be rejected in the wake of the Mamasapano incident.” (“Quevedo also invited to Council of Peace,” Bulletin)

“’For those who fear that they are not independent, we can categorically assure you that this national peace summit is a conclave of men and women who genuinely seek peace,’ presidential spokesman Edwin Lacierda earlier said.” (“No EO needed for National Peace Council convenors,” Star)

“A statement from the council released to the press on Friday quoted former Ambassador to the Holy See and Malta Howard Dee as saying at the council’s first meeting that their ‘overarching goal is peace with justice and development in Muslim Mindanao: A political peace settlement that addresses the injustices inflicted on the Bangsamoro religious, cultural and political identity as a people.’

“’After all, they had their political identity before there was a Philippine nation,’ Dee said.” (“Peace body to work in clusters,” Inquirer)

In the interest of transparency: Secretary Teresita Quintos Deles, Presidential Adviser on the Peace Process, is the sister of CMFR Executive Director Melinda Quintos de Jesus.