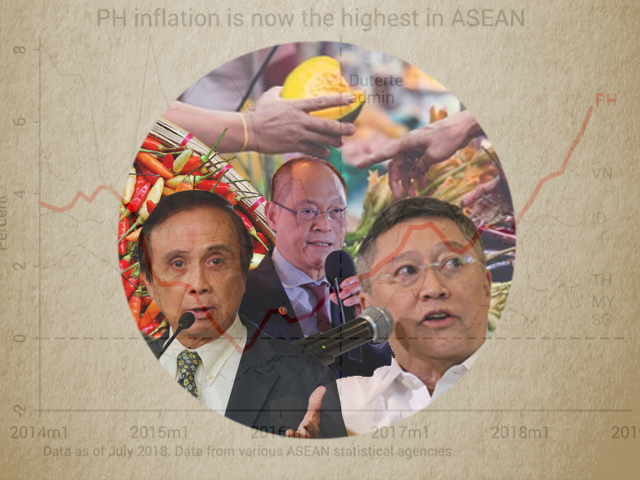 THE PHILIPPINE inflation rate has reached a nine-year high of 6.4%, exceeding the government estimate of 5.8% to 5.9%. But the Duterte regime describes it as “manageable” and “not alarming” even as the poor are struggling to cope with the high prices of basic commodities such as food.

The government blames, among others, the dwindling supply of rice for the surge in the inflation rate. True enough, the Philippine Statistics Authority (PSA) reported that as of August 1, the country’s total rice inventory was 23.61% lower than July’s. Rice production has also declined from 4.15 million metric tons last year to 4.09 million metric tons this year.

To cope with the inflation, President Rodrigo Duterte’s economic managers have drawn up a list of planned reforms that include importing more agricultural products such as rice, fish, and sugar from other countries. They said the imports would increase supplies and lower prices.

The question, however, is whether the high inflation rate is caused by food shortage and will these “food reforms” be enough.

The government also blames the rising prices of crude oil in the world market, currently almost  $80 per barrel, for the rising inflation rate.

While this can indeed be a factor, Jan Carlo Punongbayan from the University of the Philippines School of Economics explained that the inflation rate is also influenced by domestic factors.

The Philippines is heavily reliant on the importation of petroleum products, with 94% of the country’s oil supply coming from overseas, the highest among its Southeast Asian neighbors. Imported petroleum products are used for the production of raw materials as well as the transport of  basic commodities among others. But the rising price of oil in the world market cannot be solely blamed for the country’s high inflation rate.

While such international factors cannot be controlled by the Philippine government, the least it can do is to adjust local policies to temper the rising prices of goods, continued Punongbayan.

Punongbayan said that one of the local policies that needs adjustment is the Tax Reform for Acceleration and Inclusion (TRAIN) Law, which has always been dismissed by the Duterte regime as a crucial factor in the surge in the inflation rate while it blames everything else.

The excise taxes on petroleum products, sugar-sweetened beverages and tobacco, among others imposed by the TRAIN Law are then passed on by producers to consumers. Punongbayan said that the government did not foresee what he called “the domino effect” of the TRAIN Law.

Socioeconomic Secretary Ernesto Pernia has said that the TRAIN law had only a minimal effect on the 6.4 % inflation rate. Government claims that only 0.4 % per 1% of inflation can be blamed on TRAIN.

Punongbayan pointed out that the Department of Finance (DOF) has refused to release the formula or model the government used to come up with these numbers. As of now, the media and non-government economists are still in the dark as to how the government computed the TRAIN law’s effect on the inflation rate and whether or not the data its economic managers presented are accurate.

“DOF only directs inquiries to its website in which these numbers have been uploaded. But what economists want to know is what numerical model the government used (to arrive at these figures) so we can replicate it,” said Punongbayan.

Knowing the actual effect of TRAIN on the inflation rate is vital in assessing whether the government should continue pushing the other packages of the tax reform program or amend it.

Punongbayan explained that the imposition of additional taxes brought about by TRAIN package 1 is not yet over. There will automatic tax additions on January 2019 and another one on 2020 while the second package of the tax reform program has just been passed in Congress and is waiting for the Senate’s version before its full implementation that will bring more tax adjustments.

“A full review of the effects of TRAIN 1 should be done instead of rushing to pass TRAIN 2. The government needs to evaluate the different effects (of TRAIN 1). They should not rush the policies since millions of Filipinos are already affected by TRAIN 1,” Punongbayan stressed.

Pernia, Budget Secretary Benjamin Diokno and House Speaker Gloria Macapagal-Arroyo have all brushed off the urgency of mitigating the rising prices of commodities.

“If most Filipinos expect the inflation to still increase, workers will demand higher pay, restaurants will adjust their prices or serving quantity, and consumers will hoard basic necessities in anticipation of higher prices,” Punongbayan explained. “These will only accelerate the rise in the prices of goods.”

It is important for the government to moderate people’s expectations on the inflation rate. It should at least admit that it is a serious problem, and that the effect of such local policies as the TRAIN law had been miscalculated to some degree.

Punongbayan pointed out that while food is only the second largest contributor to the overall inflation rate, it is a big part of the daily budget of Filipinos. This means that even a slight increase in food prices has a huge impact on the lives of the poor. And while addressing the food shortage will help lower the inflation rate, it is not the only factor that the government needs to address, Punongbayan stressed.

Unfortunately, much of prime time news aired the cacophony of statements from different government officials which neither explained what was happening, nor offered concrete solutions to the country’s economic problems.

Only a handful of media networks such as ANC’s Dissecting Data, “Rappler Talk” and GMA News’ Facebook live featured other resource persons including non-government economists who presented a different perspective and provided the audience information that could have enabled them to demand quicker response to the crisis of high prices.

Primetime news should have picked up from these public affairs programs, transmitting information that reaches a wider public.