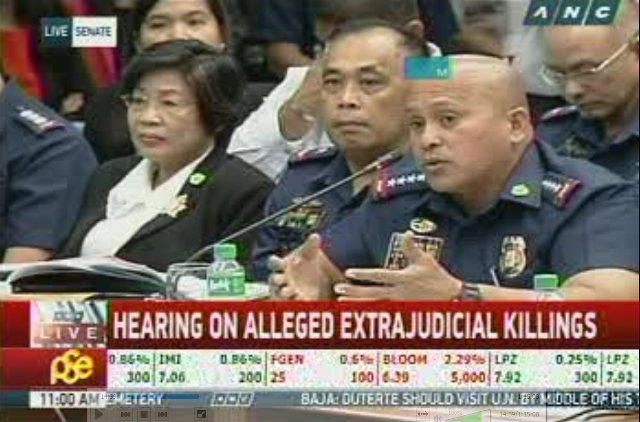 THE NUMBER of deaths in President Rodrigo Duterte’s war on drugs rises by the day, raising concerns and eliciting criticism not only from some Filipinos but also from lawmakers and human rights advocates both here and abroad. Duterte and Philippine National Police (PNP) chief Director General Ronald dela Rosa have defended their campaign, often arguing that the police killings should be viewed with “presumption of regularity” in mind.

The principle—presumption of regularity—assumes that a public officer is acting in accordance with his functions and within the limits of the law. In the eyes of the Duterte administration, the killings are well within the bounds of the police’s duty and of the law and that whoever accuses the authorities of violating their mandate must show that that is indeed the case. In reality, however, that assertion serves only to shut up critics or dismiss criticism.

The police, he said, have the power to arrest anyone only in two instances: (1) when serving a warrant of arrest issued by a court; and (2) when a crime is being committed by an individual in the presence of the police (warrantless arrest). These are clearly stated in Section 13 of the Revised PNP Manual on Operational Procedures published in December 2013, along with guidelines and procedures that police officers must follow when conducting an arrest.

While it is clear that apprehending suspects is part of the duties of the police, it is in the manner in which arrests are done and what comes afterward that causes problems.

Policemen do not automatically have the power to kill a suspect even if he resists. Instead, police should use reasonable force to subdue and take the suspects into custody. Rules 7.1 (Excessive Force Prohibited), 7.5 (Application of Necessary and Reasonable Force) and 13.1 (Arrest: General Guidelines) of the PNP manual stress this point. Only when there is “imminent danger” to human life can policemen use deadly force against a suspect. According to the PNP manual itself, the elements of imminent danger are the following:

As Butuyan aptly pointed out, imminent danger to human life is the “justifying circumstance” for self-defense or defense of a stranger, which makes the killing lawful. In which case, the use of firearms in police operations to subdue suspects can be justified if the police are facing a real threat to their lives. (PNP Manual, Rule 8.1)

But it also noted that the Supreme Court has ruled that a justifying circumstance is not presumed in police killings. Therefore, policemen who kill a suspect have the burden of proving that the circumstances warranted the death.

As the current trend in the anti-illegal drug campaign shows, police authorities would usually justify the killing of a suspect by claiming that he resisted arrest.

Some cases show otherwise, such as the cases of Jaypee and Renato Bertes who were killed inside a police station in Pasay City on July 7, and the killing of pedicab driver Eric Sison on August 23. Investigation into and the  autopsy of the Bertes case revealed that the father and son had already suffered injuries before their death, while a video of the police operation involving Sison suggests that the police unnecessarily used deadly force—Sison was already ready to surrender.

Disregard for Due Process

President Duterte’s promise of protection for police authorities performing their duties even to the extent of killing suspects is already alarming in itself as it promotes violence and, worse, encourages disregard for due process and human rights.

With the campaign far from over, the number of casualties is sure to continue to rise, given the questionable justification the police use for the killing of alleged drug pushers. One of the best ways, then, to help keep the public safe in these dangerous times is to arm citizens with crucial information. The media can do that by providing more insightful and understandable explainers of relevant laws and principles such as the Inquirer opinion piece.

News organizations, editors and gate-keepers should take note, radio talk show hosts included: Presumption of regularity as a legal principle does not apply as a matter of course to police killings.  News stories reporting killings by police should provide this context.

As all these cases need to be investigated, the press need to follow up with inquiry into the findings.