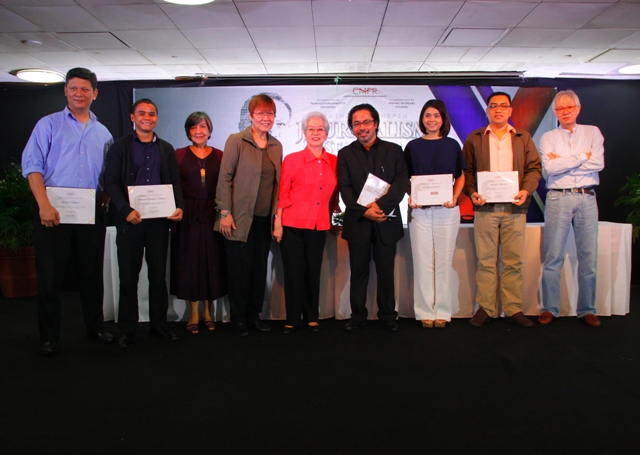 THE CENTER for Media Freedom & Responsibility (CMFR) awarded Ed Lingao of TV5 the 2016 Award of Distinction, and the Embassy of Canada presented the plaque for the 2016 Marshall McLuhan Fellow to Gigi Grande of ABS-CBN Corporation in a ceremony held today at the AIM Conference Center, Makati.

The presentations took place after this year’s Jaime V. Ongpin Journalism Seminar (JVOJS) during which five journalist-panelists discussed the media coverage of the 2016 elections, the Duterte administration and human rights.

The Embassy of Canada, with support from SunLife Financial Inc., sponsors the fellowship named after communication theoretician Marshall McLuhan. The program consists of a two-week familiarization and lecture tour of Canadian media and academic organizations, and later, a lecture tour of Philippine universities under Embassy auspices.

The Marshall McLuhan Fellowship was first awarded in 1997. Eighteen journalists have been named as Fellows, among them Sheila S. Coronel (then of Philippine Center for Investigative Journalism and now with Columbia University’s Journalism School and Stabile Center for Investigative Journalism), Yvonne T. Chua (VERA Files), Ed Lingao, Carolyn O. Arguillas (MindaNews), and Cheche Lazaro (ProbeTV), among others.

The panelists in this year’s JVOJS were:

The panelists join the roster of Jaime V. Ongpin Journalism Fellows, a community of journalists and media practitioners, who are invited to participate in CMFR’s events and programs and those of their partner organizations here and abroad.

CMFR has been active in the promotion of media responsibility and the protection of press freedom in the context of Philippine democratic development.