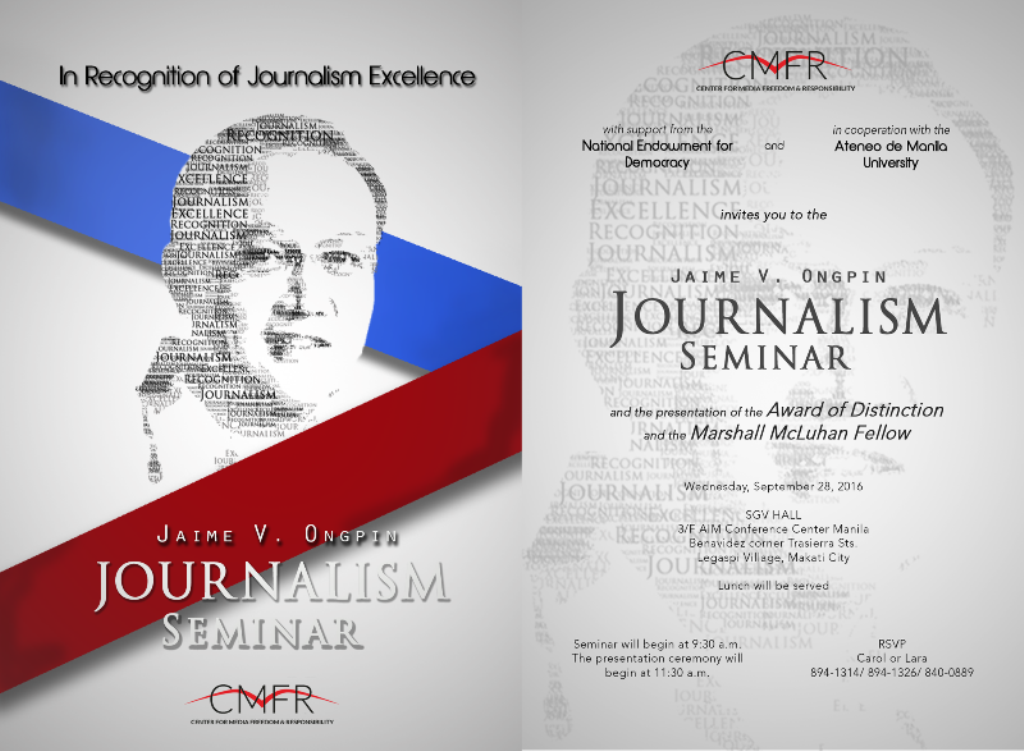 FIVE PANELISTS from television, print and online news organizations will discuss the media and the 2016 elections and the coverage of issues raised during the first months of the Duterte administration, including human rights.

The Jaime V. Ongpin Journalism Seminar is a program of the Center for Media Freedom & Responsibility (CMFR), designed to recognize journalists who have done outstanding work as editors and reporters. It will be held on Wednesday, September 28, 2016 at the SGV Hall of the Asian Institute of Management (AIM) Conference Center Manila (Benavidez corner Trasierra Sts., Legaspi Village, Makati City), starting promptly at 9:30 a.m.

The annual event serves as a memorial for the late Jaime V. Ongpin’s work as a press freedom advocate during the Marcos regime in the early eighties. CMFR’s flagship programs include press freedom protection and the promotion of media ethics.

The panelists who have been selected by senior journalists serving on CMFR’s Board of Trustees are:

The panel discussion will be followed by the presentation of the Award of Distinction, recognizing an outstanding report or body of work of an individual journalist or news organization, and the 2016 Marshall McLuhan Fellow. The Embassy of Canada, with SunLife Financial Inc., sponsors the fellowship named after the Canadian communication theoretician.

The fellowship consists of a two-week familiarization and lecture tour of Canadian media and academic institutions, and later, a lecture tour of selected Philippine universities under the auspices of the Embassy of Canada in the Philippines.