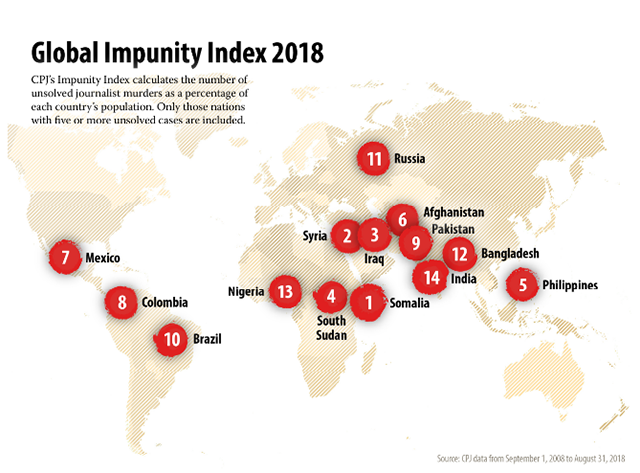 NEW YORK-BASED press freedom watchdog Committee to Protect Journalists (CPJ) has released its 2018 Global Impunity Index which ranks states with the worst records of prosecuting the killers of journalists. For the second consecutive year, the Philippines ranked fifth preceded only by South Sudan, Iraq, Syria and Somalia, which topped the list.

CPJ’s Global Impunity Index is published annually on November 2 to mark the International Day to End Impunity for Crimes Against Journalists. It relates the number of unsolved murders over a 10-year period to each country’s population.

CPJ reported that at least 324 journalists have been silenced through murder worldwide, and that the perpetrators in 85% of these cases have yet to be convicted.

“It is an emboldening message to those who seek to censor and control the media through violence. More than three quarters (82 percent) of these cases took place in the 14 countries that CPJ included on the index this year,” Elisabeth Witchel, CPJ Impunity Campaign Consultant said.

In a Palace briefing, Presidential Task Force on Media Security (PTFoMS) Executive Director Joel Egco said the results of the report were expected as the study spanned a 10-year period. This includes the Maguindanao massacre, the deadliest attack against journalists in Philippine history that killed at least 32 media workers in 2009, Egco noted.

Egco also said they will seek clarification with the CPJ on the 40 unsolved cases in the country over the last ten years that it mentioned.  He thought this figure referred to the 32 killed in the Maguindanao Massacre, and wondered where the eight others are from. Based on CMFR data, the total number of journalists killed in the Philippines from 2008 to 2018 is around 84.

Egco also called on stakeholders “to reach out and foster an atmosphere of inclusiveness and cooperation to fulfill our mandate to protect the life, liberty and security of media workers because for us, failure is not an option.”

The ASEAN Parliamentarians for Human Rights (APHR) urged Southeast Asian nations to put an end to the “growing assault” against press freedom. The group of regional lawmakers called for justice on those responsible for killing media workers as a culture of impunity emboldens more attacks on journalists.

“The Philippines has a shameful record of holding killers of journalists to account – authorities should focus on seeking justice for these attacks, not trying to silence legitimate criticism,” Santiago said.

In a statement, UN experts David Kaye, special rapporteur on the promotion and protection of the right to freedom of opinion and expression, Agnes Callamard, special rapporteur on extrajudicial, summary or arbitrary executions and Bernard Duhaime, chair of the working group on enforced or involuntary disappearances, asked world leaders to ensure that those responsible for inciting  violence against journalists be held accountable.

In nine out of 10 cases, the murderers go unpunished. This impunity triggers further violence and attacks, said the UN experts. They added that perpetrators must be brought to justice and victims and families should have access to remedies.