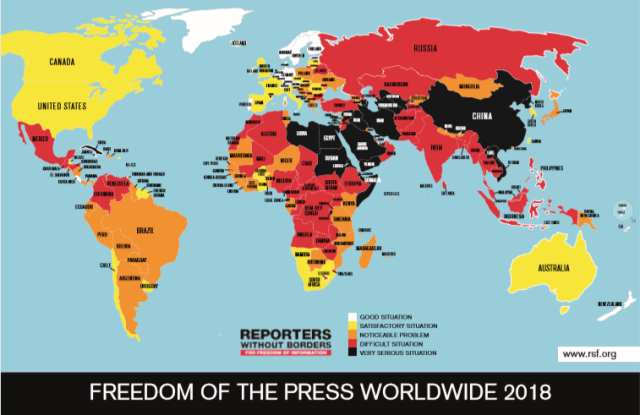 Annually published since 2002, the Index measures the degree of freedom available to journalists in 180 countries through a two-fold procedure. RSF conducts a qualitative analysis of the responses of experts to a questionnaire that evaluates 1) pluralism, 2) media independence, 3) media environment and self-censorship, 4) legislative framework, 5) transparency and 6) the quality of the infrastructure that supports the production of news and information. RSF also analyzes quantitative data on abuses and acts of violence against journalists during the evaluation period.

In the Philippines, RSF noted President Duterte’s attacks on the Philippine Daily Inquirer and ABS-CBN, and the revocation of Rappler’s license to operate. RSF said, “There have been countless examples of Philippine government harassment of media that voice any kind of criticism of Duterte’s ‘war on drugs.’ Here again, verbal violence and physical violence are closely linked. With four journalists murdered in connection with their work in 2017, the Philippines is one of the (Asian) continent’s deadliest countries.”

“More and more democratically-elected leaders no longer see the media as part of democracy’s essential underpinning, but as an adversary to which they openly display their aversion,” RSF reported.

Last April 26, Presidential Spokesperson Harry Roque said in a Palace press briefing that despite the drop in rankings, it was “still an improvement from where we were at 138th with the entry of the Duterte administration.” He denied that the president’s tirades against the media are attacks on press freedom and contributed to the country’s lower ranking in the RSF Report.

Roque added that  Duterte has not imprisoned any journalist or sued anyone for libel. He did not mention Duterte’s order to the Securities and Exchange Commission to investigate online news site  Rappler and that body’s rescinding its registration, or the threat to withdraw the franchise of TV network ABS-CBN, among others.