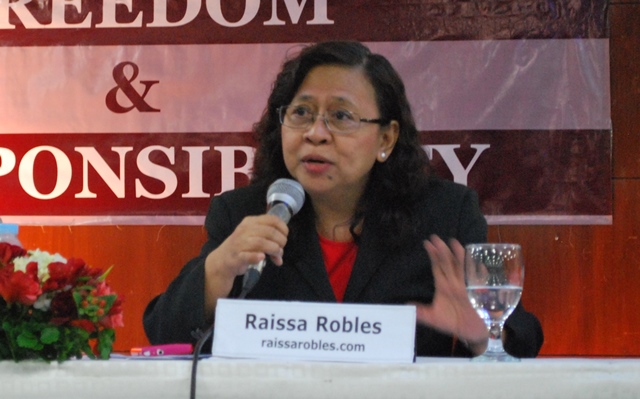 A JOURNALIST and an institution from the Philippines are in the list of winners in the International Journalism and Media Awards 2016 given by Geneva-based International Christian Organization of the Media (ICOM).

Raissa Robles has been named one of the recipients of the International Award for Excellence in Journalism, along with 13 other journalists from other countries. An investigative journalist, Robles is currently the Manila correspondent of South China Morning Post (Hongkong), Asia’s oldest English language newspaper, and Radio Netherlands. Her published books include To Fight Without End: The Story of a Misunderstood President, Trianggulo and most recently, Marcos Martial Law: Never Again.

Robles was also a former panelist in the 2013 Jaime V. Ongpin Journalism Seminar held by CMFR.

School of Dialogue with Oriental Religions (SOR), an institute based in Tagaytay City, is conferred the International Award for Excellence in Communication (Cardinal Foley Award). SOR was founded in 1982 by Chiara Lubich, a laywoman from Italy, when dialogue between members of the Focolare Movement and the mahayana Buddhists from the Rissho Kosei-kai movement began. The institute offers courses that aim to “give formation to Christians from around Asia for dialogue with members of the continent’s religious traditions.”

Robles and SOR, along with all other winners, will receive their awards during the World Media Congress in the Philippines to be held from October 9 to 12 in Tagaytay City.

The Awards, given triennially, honors outstanding media professionals, publications and institutions worldwide for their exemplary work that proves valuable in diverse fields. The Awards also help guarantee freedom of expression and freedom of the media at all levels despite political, business and religious pressures.

ICOM, the World Forum of Professionals and Institutions in Secular and Religious Journalism, brings together journalists, publishers, members of the academe and other journalism and media experts from all parts of the world to uphold the practice of value-oriented journalism. It was founded in the late 1800s by a group of journalists who wanted to serve as guide to people especially in time of war and conflict, when people could no longer rely on their political or religious leaders.

For the complete list of winners, visit this page.