THINK BEFORE you click. You may be sharing propaganda as truth—and thus, helping to dumb down people who access the Internet and social media.

The Internet, as a wide and open platform, provides space for a vast number of websites of dubious reliability, which are nevertheless, widely quoted  and  used as sources of information to spread propaganda or any social or political organization, including the government.  There are many who assume that whatever appears on the Net must be true. The “information” they provide is shared in different social media platforms, especially on Facebook, without verifying through other sources whether it is accurate or not. 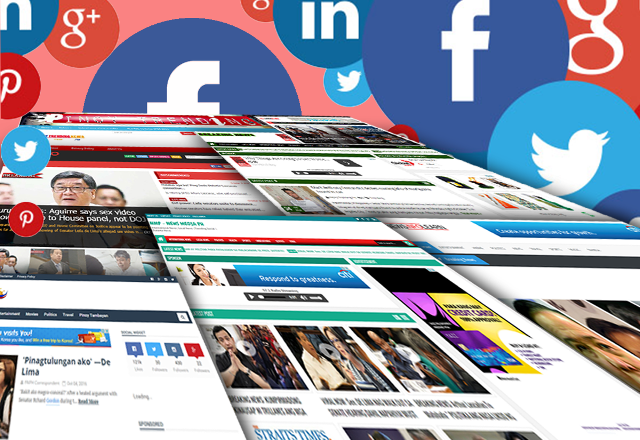 Since it is easy to create a website with content management systems like WordPress and Blogger, the number of sites providing news and information has increased. Websites have sprouted with outright biases for political parties and politicians or for a clear and acknowledged advocacy for a cause. Sites that aggregate—or collect and repost– news from other news sources without checking its accuracy are also on the rise.

A huge number of websites present themselves as “news providers.”  But these do not always produce their  own content.  A majority of these draw their stories from trending and viral posts in the Internet. One example is the Aug. 26 post from President Rodrigo Duterte’s campaign spokesperson Peter Laviña of a photo of a  nine-year-old girl who was supposedly  raped and murdered somewhere in the Philippines.

Laviña said in his post that “We haven’t heard condemning (sic) this brutal act from human rightists, bishops and ‘presstitutes’ who are derailing the government’s war against drugs and crime.” The posts garnered 4,600 likes in Laviña’s Timeline alone; shared 5,000 times by other Facebook users and was reported by online news sites.

The photo was a hit in that sense– only to be debunked by Filipino journalists Froilan Gallardo and Inday Espina-Varona, who found a link that revealed that the incident happened in Brazil, not the Philippines. Clearly, the Laviña post was propaganda based on false information and  meant to provoke anger against human rights activists, the religious, and members of the press critical of the government’s war on drugs.

CMFR tried to track online trending news websites (Trend Titan, News Info Learn, Public Trending, News Today, Politiko.com among others) that carried Laviña’s post and found that the news article has not been removed or edited despite its having been proven to be false. This raises questions about the credibility of these websites and the capacity of social media users who share them to identify what’s reliable and what’s not.

CMFR listed the following criteria which should warn Internet users about the reliability of their content:

Fake news sites are designed like legitimate sources of news. They are presented to be legitimate news providers, employing trained and credentialed reporters, with articles that are vet-ed by editors, imposing a fact- and –context checking process.

One quick way of checking the legitimacy of the news is a website is the editorial information about the providers.  The “About Us,” “Contact Us” page of websites contains information about the site’s editorial team and staff, the physical address, telephone number, email address, its history, and other important information.  As in mainstream news, these websites list the names of persons who are accountable for the content it holds.

A news website should be accountable for what is posted on its page, and it starts with identifying the people behind it, as well as how they can be contacted so they can be asked to explain errors posted in their sites, among others. These are set apart from bloggers. They do not choose anonymity and like their counterparts in the mainstream are answerable to the public.

These should be differentiated from bloggers who write opinion pieces. Bloggers may choose to write under a “psyeudonym” for whatever reason. These do not pretend to provide news content about events and developments to inform people about current public affairs. They are expressing what they think. Their political opinions should be regarded as columns and readers can agree or disagree with them. In journalism however, commentary should be based on factual information.

Websites which present news from through aggregated content do so without checking whether these are true or not.  The practice exerts no effort to verify the sources or the process by which the report is produced. Content aggregators and curators scour the net for interesting content and share it with the Internet and social media community. Websites which aggregate and curate content nowadays do not only share content; they also create their own reports from other news sources. These often do not verify information prior to quoting a news article, hence the possibility that they’re spreading falsehood. Another practice is to pull out a factual report from mainstream news sources and to “spin it”—giving it an entirely new meaning.

Users of such websites should check whether the website shows any kind of information about who is doing the aggregation. If there is no information about the producers of the content, then what they offer should not be taken as editorially processed news.

These news websites invite the public to contribute content. Anyone is welcome to send articles, videos or photos to be posted on the website regardless of its being biased, and whether it’s a public relations piece or downright propaganda.  These do not satisfy any journalistic criteria and should be dismissed as a news source.

Generally, these sites pick up selectively from viral and trending posts in the internet. No other criteria  govern the selection. If the content has gained a significant amount of following, it is included, the only purpose for that use is to be hooked on to the “viral.”

Some of these sites provide an excuse from possible errors, warning users with a disclaimer that their content has not been verified and is likely to be unreliable. 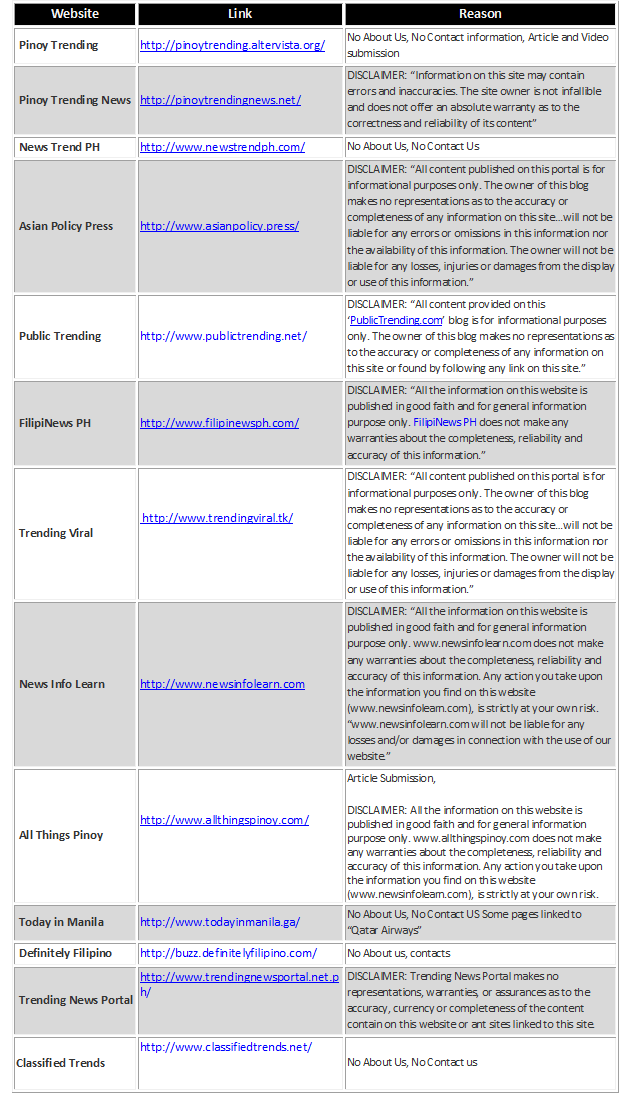 Satire uses “humor, irony, exaggeration and ridicule to expose and criticize people’s stupidity, or vices, particularly in the context of contemporary politics and other topical issues.” It is applied in various literary forms, essays, editorials, drama, plays and film. Satire makes fun. It creates fictional characters and situations to render more sharply the folly and error involved in the subject of the satire, without reference to the actual public figures, actions or developments bein g satirized. While the work itself is fictional, like all great literature, good satire actually shows up and exposes ‘truth.”

Its more contemporary forms are the spoof or send-up. All done in the spirit of fun, satire succeeds as sharply critical of the subject.

Material from satirical websites, the content of which is often taken literally by those who access them, despite tag lines and disclaimers that proclaim that they are satirical, or are meant to spoof or make fun of ideas, events and individuals, are also often used and reposted as if the content is factually true.

Many Filipino social media users cannot distinguish truth from satire. A Rappler Move.PH article “Why can’t many Filipinos tell truth from satire?” by Rappler Social Media producer Marguerite de Leon points out that while other cultures have a ready understanding and appreciation for satire, this is not generally true in the Philippines. The article pointed out that “It’s possible, through a flawed educational system, that many Filipinos were not taught to think critically enough. And if you can’t think critically enough, grasping satire may be more difficult than it should be.”

CMFR also compiled a list of some of the satirical websites in the Philippines:

The Asia Digital Marketing Association (ADMA) noted that in 2015, the Philippines had the 2nd highest number of Internet users in Southeast Asia and was 6th in all of Asia with 44.2 million users. Ninety-four (94) percent of these numbers have social media accounts which they use to share news and information. This 94 percent can be influential in shaping the international image of the Philippines among people from other countries who access social media.  What’s as important, they also multiply possible errors among themselves and the rest of the Philippine Internet community by reposting and sharing flawed information.

It is important to read and be critical of material posted in certain sites before actually liking or sharing them on Facebook or Twitter. Sharing misinformation through social media can actually lead to the dumbing down of large numbers of people, and contribute to the further deterioration of democratic discourse.