Invitation to Cover'Trail of Impunity' 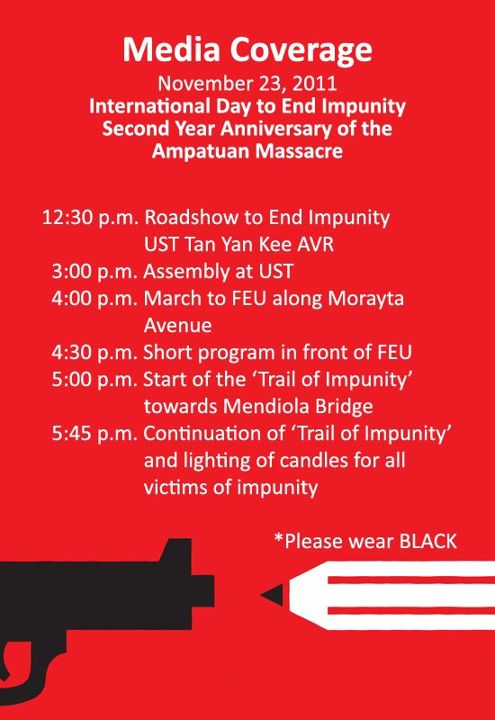 Invitation to Cover and Join
11.23.2011
International Day to End Impunity (IDEI) and Second Anniversary of the Ampatuan Massacre

What:
Roadshow to End Impunity with the University of Santo Tomas Journalism Society and Communication Arts Students’ Association
Commemoration of the International Day to End Impunity and the Second Anniversary of the Ampatuan Massacre (32 of the 58 murdered were journalists/media workers)

• From UST along Espana Avenue to Mendiola Bridge

A trail of impunity will be left during the march: outlines of bodies will be drawn on the streets to depict the continued killings.

At the foot of Mendiola bridge, leaders from the media and concerned sectors are enjoined to help trace more bodies in chalk until the ‘crime scene’ surrounded by yellow police tape is filled.

Schedule:
12:30 p.m. Roadshow to End Impunity (UST Tan Yan Kee Student Center AVR)
3:00 p.m. Assembly at UST
4:00 p.m. March to FEU along Morayta Avenue
4:30 p.m. Short program in front of FEU
5:00 p.m. Start of the ‘Trail of Impunity’ towards Mendiola Bridge
5:45 p.m. Continuation of ‘Trail of Impunity’ and lighting of candles for all victims of impunity