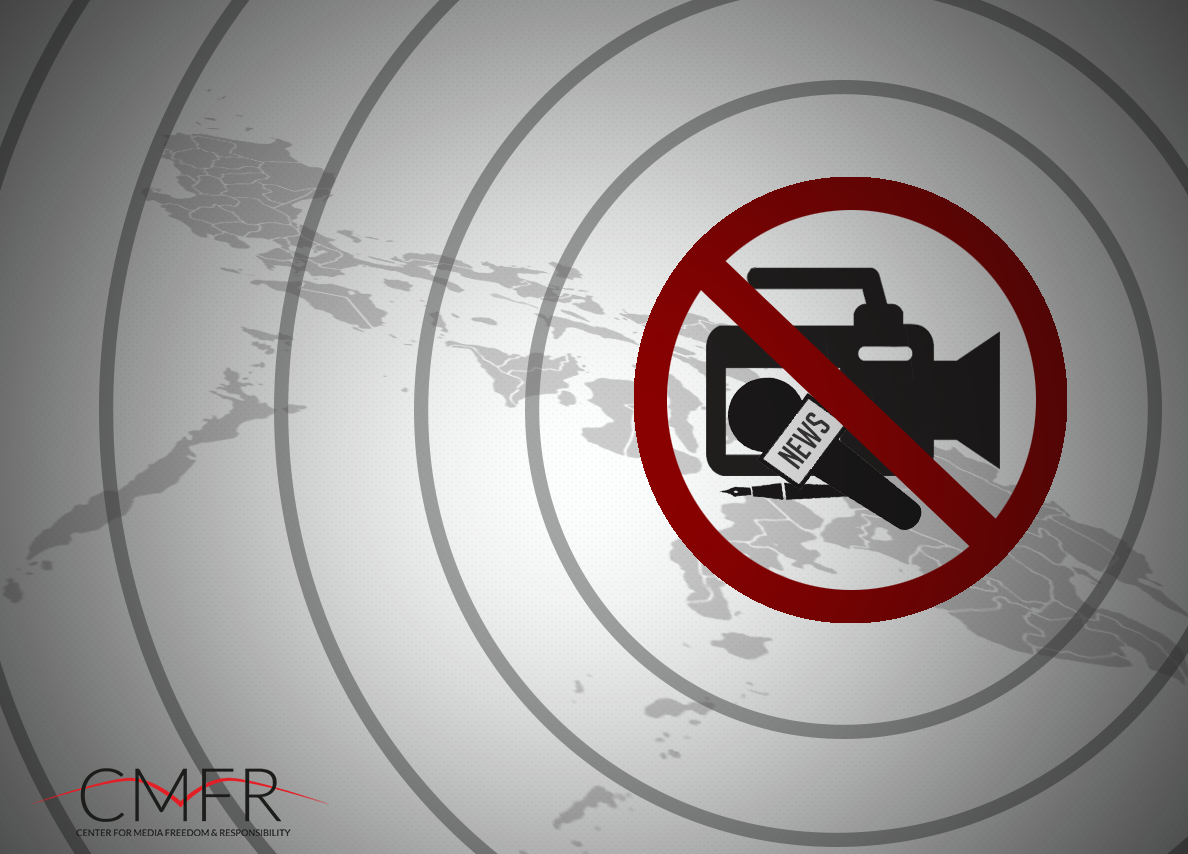 The Philippines is no exception to this observation, as President Duterte, on numerous public occasions, has hurled verbal abuse at journalists and media organizations. On another level, some government offices have applied restriction to journalist access to events and press briefings, subjecting them to prior restraint. CMFR issues an Alert on the following developments:

On February 21, Rappler reporter Pia Ranada, who covers the Palace, was indefinitely banned from entering the entire Malacañang complex without clear reason from the Presidential Security Group (PSG). The day before, Ranada was prevented from entering the New Executive Building which houses the work area designated for the press.

The ban on Ranada came after the Senate hearing on the Philippine Navy’s frigate deal, during which Bong Go, Special Assistant to the President, accused Rappler and the Philippine Daily Inquirer of writing “fake news” about his alleged intervention in the deal. Malacañang justified the ban by citing the Securities and Exchange Commission’s (SEC) revocation of Rappler’s license last January 15, which is still under appeal.

The Rappler team sent to cover the April 17 to 21 Palarong Pambansa in Vigan City and nearby Ilocos Sur towns were denied access to the media center, an official press conference, and the opening and closing ceremonies, the former attended by Duterte. GH Ambat, Department of Education (DepEd) Assistant Secretary, told Rappler that DepEd’s ban was based on the SEC ruling.

The government closed down Boracay island for a six-month period to clear illegal structures and clean up the waste water system of the country’s major tourist destination on April 26.  The Department of Tourism (DOT) issued media accreditation guidelines on April 14, limiting the entry of journalists and TV crews. The guidelines have been criticized as government’s way to prevent access to critical media, selectively favoring the media practitioners who are friendly to government.

The guidelines said that accreditation of TV networks is limited to a maximum of 12 people. For radio, print, wires and online platforms, not more than five people are allowed. The DOT said “vetting and processing” of applications would take three to five working days.

The DOT did not say, however, who is responsible for the vetting process. The guidelines did not say what basis would be used for possible rejection of applications.

Prior to the six-month closure, hundreds of police, soldiers and coast guard members were deployed to the island to prepare for “emergency scenarios” that may happen during the shutdown period.

Media reports in late April said the Press and Public Affairs Bureau (PPAB) of the House of Representatives formulated new rules for media coverage, which include denial of accreditation or revocation of a House media ID “if the bearer besmirches the reputation” of the House’s members. Reports also say the guidelines prohibit ambush interviews.

No copy of the guidelines has yet been made available for public access. PPAB told CMFR via phone that the copy was a draft given to House reporters during a meeting on April 23.

Media reports on the issue cited as grounds for revocation of media IDs, among others, false claims, involvement in activities that violate House policies and gross misconduct. It is not clear at this point how the PPAB will evaluate reports to be defamatory.

PPAB told CMFR that so far, the office has not scheduled when the guidelines will be finalized or made effective.

Members of the Foreign Correspondents Association of the Philippines (FOCAP) covering the ASEAN Summit last April 26 and 27 were denied access to one press conference and prohibited from asking questions in another.

The Philippine government held press briefings in Singapore, this year’s host of ASEAN, last week. Duterte attended the summit, accompanied by Cabinet members. On April 26, Malacañang’s MARO initially barred FOCAP members from covering a briefing with Foreign Affairs Secretary Alan Peter Cayetano. They were eventually granted access on the condition that they do not ask questions. The following day, the correspondents were denied entry to a press briefing with Labor Secretary Silvestre Bello III, which discussed the diplomatic crisis between the Philippines and Kuwait.

FOCAP decried the prohibitions in a statement, saying the FOCAP members in Singapore were “properly accredited by the government’s International Press Center (IPC).”

FOCAP said the government’s actions clearly violated Constitutional provisions of freedom of information. In the same statement, FOCAP referred to the restrictions in media coverage of the Marawi siege and Boracay closure as curtailments of press freedom.

Restrictive measures taken by the government are not unique to the Philippines. RSF noted the same hostility to press freedom in Southeast Asian countries, as some of them are have been influenced by China’s model of censorship and media control.

In the United States, President Donald Trump has branded the press “an enemy of the American people,” attempting to block White House access to several media outlets and calling for revocation of broadcasting licenses.