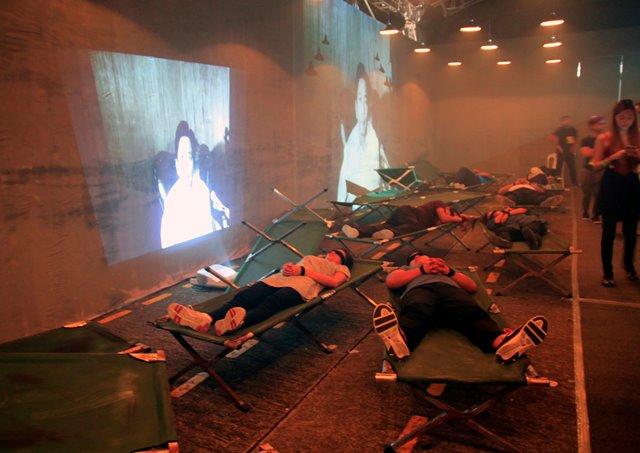 Visitors of the Hall of Restless Sleep, the first of eight halls at the Experiential Museum, are welcomed by a video of then President Ferdinand Marcos declaring Martial Law. Also in the hall are individuals lying on army cots, their hands bound and their eyes blindfolded–representing the suppression of freedoms during the dictatorship.

THAT THE Marcos family has succeeded in revising history, and fielding Ferdinand Marcos Jr. as a candidate for vice president in the 2016 elections is the ultimate proof of the reality of impunity in Philippine society and its failure to exact accountability for corruption and other crimes.

The Marcos family, their crony officials and friends, fled the country in fear for their lives after the triumph of People Power in February 1986. In the first year of CNN, the events during those days were seen all around the world, the first such event to be covered as “real-time” news. Hundreds of thousands of people kept vigil on the streets, standing against the tanks which were ordered to move against them, and calling for the fall of the “conjugal dictatorship.” There is no other side to that story. There is only one side.

And yet, 30 years later, the Marcos family has become so confident and so bold that it has dismissed People Power, its meaning and reality for their own political ends.

While the press managed to cover the event with some measure of professionalism, most of them—with very few exceptions—failed to adequately challenge the revisionism and the cynical attempt of Bongbong Marcos and his supporters to bring luster back to the name. Members of the free press, an institution liberated by People Power from censorship and control during the Marcos regime, thought it fit to provide space and time to views contrary to the story of People Power as an event that ended a dark period of one-man rule, the unchecked plunder of national treasure, and the human rights violations that have yet to be fully punished to this day.

2016 marked the 30th anniversary of the February 25, 1986 EDSA People Power civilian-military uprising, or EDSA 1. As in the past, the activities commemorated the historic event as well as paid tribute to those who fought Martial Law, which Ferdinand Sr. declared in 1972.

The commemoration of EDSA couldn’t have come at a more important time: many Filipinos today, particularly those born after 1986, are perceived to have a very shallow understanding of the Marcos years, of Martial Law and the atrocities committed during the dictatorship. This was fueled largely by the attempt by the Marcoses and those who benefitted from their reign to force their own version of history on the public, twisting the facts of what happened during that period. This revisionism has been making its way into the minds of the public, through both the old media of print and broadcast as well as through social media.

The press reported on the EDSA anniversary events as well as related issues about the Marcos dictatorship. Those responding to revisionist views and accounts came after the anniversary. Given the seriousness of the lies being peddled about the Marcos years, a stronger challenge by the press—whose freedom today can be traced to its own struggles against the dictatorship—was in order.

One of the most mentioned subjects during the anniversary coverage was President Benigno Simeon Aquino III’s speech.  In his address, he talked about the significance of remembering and learning from what the country experienced during the dictatorship.

Aquino underscored the atrocities committed during Martial Law and disputed the idea that the Marcos regime was a “golden age” for the country. He criticized Senator Marcos, who is running for vice president, for refusing to acknowledge the abuses during martial law and to apologize for his role in the dictatorship.

And in what appeared to be an effort to give to the “other side,” a boxed defense for Martial Law was inserted in the follow-up text in the Philippine Daily Inquirer’s inside pages on a February 26 report about the coverage of Aquino’s speech. It was by Senator Juan Ponce Enrile, who was Marcos’ Defense Minister and one of the architects of Martial Law. Enrile did defect, leading discontented military officers who no longer wanted to serve under General Fabian Ver, a Marcos cousin. Enrile criticized Aquino for benefitting from programs that were established during the Marcos government. “Why are we still enforcing laws made in the Marcos years if he was really that bad?” Enrile said, referring to then President Marcos, in response to Aquino’s speech. (“Enrile hits Aquino, defends Marcos years,” Inquirer, February 26, 2016)

Following the report on President Aquino’s speech, the media promptly aired Senator Marcos’s response.  He maintained that he would apologize once he knew what he has to be sorry for . Senator Enrile continued his critique of Aquino in a televised phone interview on TV5’s Aksyon on February 26 and called Aquino “mangmang” (idiot), telling him to study history more before speaking. At the same time, Enrile defended  Senator Marcos from those demanding an apology for Martial Law and blamed the succeeding governments after EDSA 1 for the state of the country today.

The denial of the horrors of martial law by Senator Marcos and the justification of what was done then—for example, by claiming that it was during the dictatorship that the country was self-sufficient in rice, roads were built and that we had the highest literacy rate in Asia—are blatantly revisionist and contrary to the facts.

When reporting these assertions without adequate context, the public may take such things as factual. It is in this sense that most in the press fell short in the reports that quoted the two senators’ positions on Martial Law and EDSA.

There is abundant non-partisan analysis available documenting the abuse of power, the decimation of the forests, the stagnation of the educational system, the decline of the economy and business policies which favored cronies during the long years both Mr. and Mrs. Marcos were in office, as she had held the position of Governor of Metro Manila. There is also a common sense response to the nostalgia of those who look back to the period of Martial Law as a much simpler time, with no traffic in the streets of Manila: Metro Manila was not the megalopolis of 11.86 million people at the time.

Some media outlets did try to challenge this revisionism. But most of these came later.

On February 26, ABS-CBN 2’s TV Patrol aired a story that discussed the wealth of the Marcoses based on their statements of assets, liabilities and net worth (SALNs). According to the report, the collective wealth of former first lady and now Ilocos Norte 2nd District Representative Imelda Marcos and Senator Marcos alone amounts to more than P1.3 billion. The report also mentioned the cases filed by the Presidential Commission on Good Government (PCGG) tasked to recover the Marcos ill-gotten wealth. A total of 111 cases were filed by the agency: 13 recovery cases, 18 criminal cases, 25 behest loans cases and 55 civil cases. In the report, the PCGG lamented how uncooperative the Marcoses have been with their agency, as shown by the fact that TV Patrol was able to acquire their SALNs while the PCGG could not. (“Yaman ng mga Marcos, umaabot na sa mahigit P1.3B base sa kanilang SALN,” TV Patrol, February 26, 2016)

The estimate of Marcos wealth is crucial because anyone familiar with Philippine history should at least question why the Marcoses are still fabulously rich despite consistently insisting that they do not have ill-gotten wealth in their possession.

An Inquirer report, meanwhile, talked about the inadequacies in the education system. Citing De La Salle University history professor Michael Charleston “Xiao” Chua, the report mentioned how textbooks used in schools today “barely touched on the Marcos dictatorship’s abuses.” The implication, Chua said, is that without proper context, People Power and Martial Law wouldn’t make sense to students. The report raised a legitimate concern that, in turn, can also be connected to why today’s youth seem to have a very limited understanding of the Marcos dictatorship and its atrocities (“Violations of rights not in textbooks,” Inquirer, February 25, 2016). The same issue was also tackled by two other Inquirer reports: “EDSA truth now catching up with lies,” March 5, 2016 and “Schools, media to blame for revisionist history,” March 7, 2015.

Also notable is a Rappler article that sought to debunk the notion that the Marcos years were a golden age. The article enumerated five points of discussion, each one accompanied by a line graph to illustrate statistical data (“Marcos years marked ‘golden age’ of PH economy? Look at the data,” March 5, 2016).

The work of democratic recovery clearly has not been accomplished in the last 30 years.  Indeed, there has been no audit of the many presidential decrees and laws passed that are still in the books today. Corruption has not been eradicated. But these days, investigative reports reveal what corrupt politicians would like to keep hidden—the difference in the current situation from the days of Martial Law.

The press obviously plays a large part in perpetrating ignorance or willful lies about the past.  But the reports about the Marcoses, with the exception of those cited above, tended to be bereft of knowledge and understanding of the historical context.

Social media have played a key role in propagating the Marcos fallacies. These views are amplified in the mainstream press. And yet journalists need to step in and do their job of ensuring that what is thrown to the public is accurate in both fact and context.

If they don’t, the public should ask why, and demand an explanation.