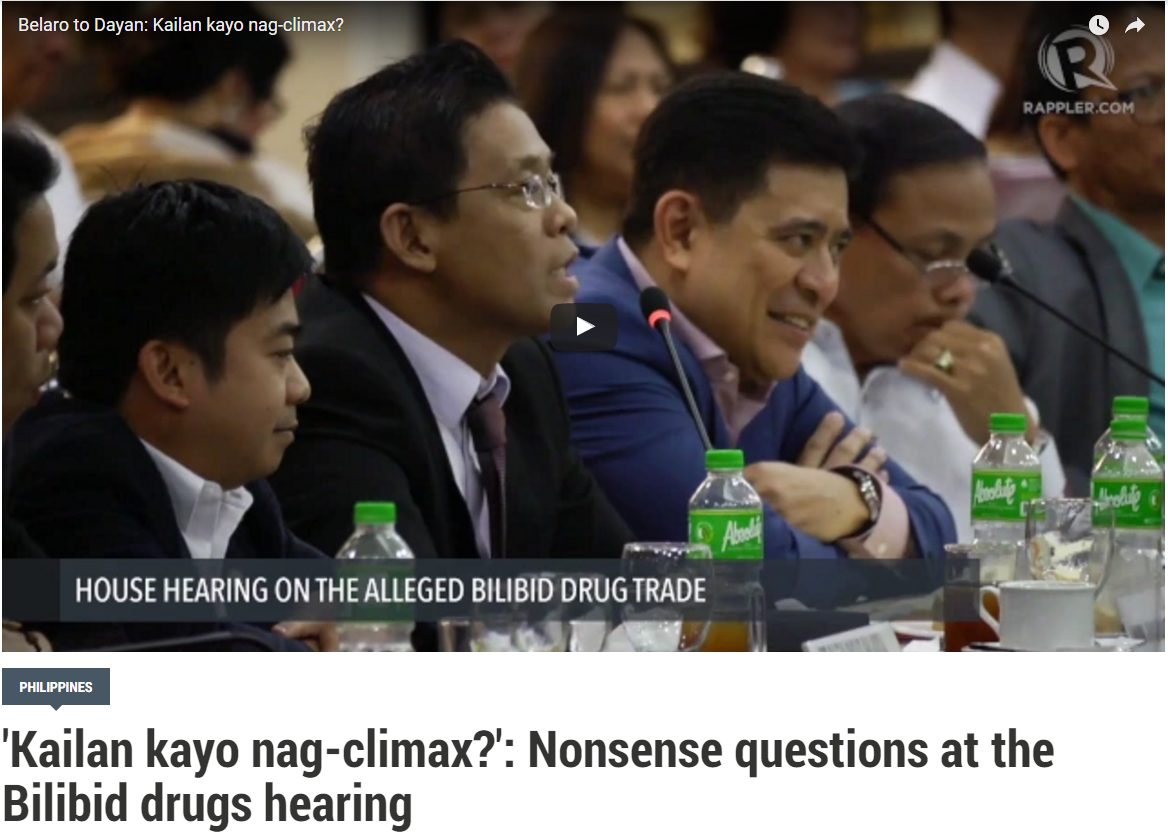 CHEERS TO Rappler and the Philippine Daily Inquirer for calling out members of the House of Representatives who posed lewd and unnecessary questions to Ronnie Dayan, Sen. Leila de Lima’s former driver, during what was supposed to be a hearing on the illegal drug trade in the National Bilibid Prison on Nov. 24.

Senator de Lima had admitted that Dayan was also her former lover, after this was revealed by other witnesses testifying in Congress.  President Rodrigo Duterte and House Speaker Pantaleon Alvarez included this relationship in their criticism of the senator.  Dayan was also identified as the alleged bagman of de Lima by previous witnesses who alleged that she had received money from drug dealers operating in the national penitentiary during her term as secretary of Justice.

Instead of focusing on Dayan’s involvement in the drug trade during the hearings held on the controversy, members of the House Committee on Justice pried into the affair of Dayan and de Lima, asking lascivious questions which elicited lascivious answers. Some representatives defended their line of questioning by saying it was essential to establish the link between de Lima and Dayan, who in the hearing admitted receiving drug money from different drug personalities. Many questions, however, did not serve this purpose and were clearly out of line.

Rappler collated some of the “nonsense” questions and listed the representatives asking these. Some of the most bizarre questions include what de Lima’s favorite dish was, when their anniversary was and whether they shared the same room. (“‘Kailan kayo nag-climax?’: Nonsense questions at the Bilibid drugs hearing,” Nov. 24)

Inquirer also ran a report calling out the salacious questioning. The report recalled how the congressmen focused on the titillating details of the affair, pointing out that the congressmen chuckled over the sexually charged questions. The report cited the statement from Ifugao Rep. Teddy Baguilat, a member of the minority of eight as well as of the House Committee on Women, and reactions of disgusted netizens. (“House members feast on De Lima-Dayan love affair,” Nov. 25)

In contrast, other news accounts capitalized on the sensational questions and answers. In one of their reports, The Philippine Star concentrated only on the liaison between de Lima and Dayan as recounted by the latter in the hearing, barely mentioning the object of the investigation, the role of the two in the drug trade. (“‘Our love was like Signal No. 5’,” Nov. 25)

The Manila Times and Manila Standard also published similar reports. Both papers ran articles retelling the affair between the senator and Dayan, including private matters which had nothing to do with the drug trade. (“‘Slapping, jealousy marred 7-yr romance’,” “‘Love’s gone when she lied’,” Nov. 25)

The press should have checked the abuse of legislative power displayed during the said hearing. The legislators had no right to satisfy their prurient curiosity about Dayan and the senator on taxpayers’ time.  They should have spent the time trying to secure evidence that would substantiate allegations about de Lima receiving money from the drug trade and the role of Dayan as the contact and carrier of these funds.  There were many listening who did not feel that the hearing yielded enough to justify filing charges against de Lima.